The first optical telescope appeared in 1607 thanks to the Dutch optician and spectacle-maker Johann Lippershey. A bit later, Galileo Galilei upgraded this invention which focuses light (or electromagnetic waves in the optical spectrum) and turned it to the sky: he observed the Moon, its craters and discovered four satellites of Jupiter.

Human abilities were significantly extended through the detection of electromagnetic waves in different length ranges, which resulted in design of new telescopes. And they enabled a great number of discoveries across our Universe. 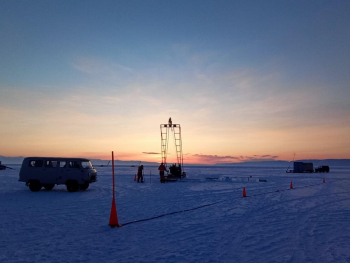 However, not all regions of the Universe are transparent for electromagnetic waves, which restricts capabilities of those telescopes.

Neutrinos, weakly interacting particles, effortlessly permeate through dense and hot areas, for instance, active galactic nuclei, and can deliver valuable information about what happened in hard-to-reach corners of the Universe billions of years ago. Actually, neutrinos, like photons (electromagnetic wave quantum), could be used to design a device of a new type—a neutrino telescope.

The neutrino telescope history dates back to 1960 when academician M. A. Markov came up with the idea firstly introduced at the Rochester conference. Modern neutrino telescopes are facilities with the volume of a cubic kilometre, that is, the largest particle detectors ever built by humankind.

The matter is complex and requires consistent cooperative efforts of physicists, engineers, programmers and other specialists. For this reason, the scientists involved in activities around neutrino telescopes which had been already built or are just being constructed—ANTARES, Baikal-GVD, IceCube and KM3NeT—established the “Global Neutrino Network” (GNN).

Christian Spiering (DESY, Germany), Doctor of Physics and Mathematics, closely follows advancement in scientific life of researchers and shares the news from the GNN participants in his monthly bulletin “GNN Monthly”. We believe that our readers will find their interest in what is going on in the world of large neutrino telescopes at present. That is why we start a new column “News from Large Neutrino Telescopes” where we are going to tell you about the most remarkable moments in the work of the people who shape future science already today. Dr. Christian Spiering will guide us to this world of large neutrino telescopes.

Cover photos of the column by Bair Shaybonov.