Yahya Tayalati, professor at the University Mohammed V in Rabat and principal investigator of ANTARES and KM3NeT in Morocco has been awarded the prestigious Mustafa Prize. This is a top science and technology award, granted biennially to the researchers and scientists of the Islamic world. Yahya was selected together with 4 other recipients among more than 500 candidates. He received the award for his contribution in beyond standard model physics, especially the “Observation of the Light by Light Scattering and the Search for Magnetic Monopoles”. In addition to being one of the leaders of the dark matter group in the two collaborations, Yahya is leading integration activities for KM3NeT DOMs at two different sites in Morocco.

See the announcement on the ANTARES webpage https://antares.in2p3.fr/News/index.html

The Report on the ESFRI monitoring of the 2016 projects is published, see https://www.esfri.eu/latest-esfri-news-project-landmarks-news/esfri-monitoring-2016

The ESFRI Working groups “consider that KM3NeT project has been developing very well toward implementation in the 10-year framework. The WGs do not identify any critical issues. A particular recommendation highlights the need to keep the timeline of the project since the scientific impact is expected to be very significant if the project is implemented on time.”  They give the marks “very high” for the scientific case and “high” for implementation (best mark of all reviewed projects).

The preparations for the next deployment season proceed as planned. 380 fully tested OMs have meanwhile arrived in Baikalsk. 80 further OMs are ready to be transported from Dubna to Siberia. The total number of OMs to instrument the two clusters planned for 2022 is 576. 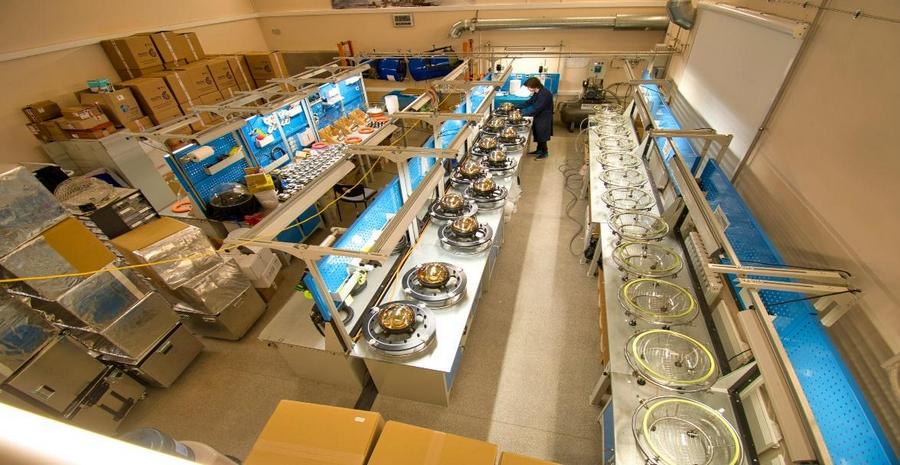 View of the OM assembly hall at JINR Dubna 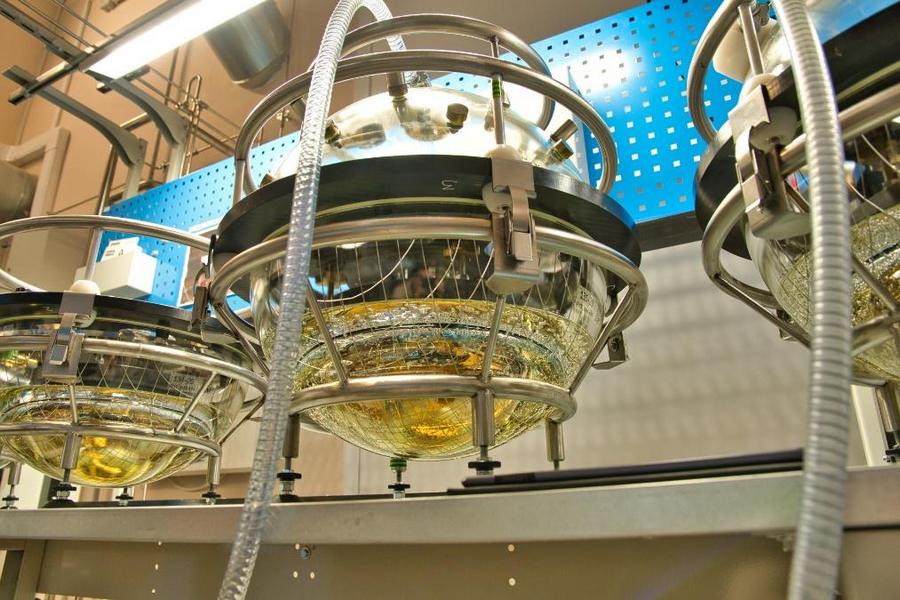 The collaboration is conducting a series of Science and Technical working group workshops that take the place of collaboration meeting parallel sessions (the recent ZOOM meeting had only plenary talks). IceCube is looking forward to the next spring meeting in person. It will be hold in Brussels in May 2022 (subject to the COVID situation).

Good news on the IceCube-Upgrade front! IceCube got the "green light" to start sending more drill cargo southward from Madison. So, the transport pipeline to the South Pole is finally expected to move, after 20 months of the stall.

After quarantine in Christchurch, New Zealand, the IceCube 2022 Winterovers, together with Ralf Auer, have now arrived in McMurdo, Antarctica.

After a one-year delay due to COVID-19, the first three radio stations of Radio Neutrino Observatory in Greenland (RNO-G) have been deployed in the ice near Summit Station.

RNO-G will target neutrinos above 10 PeV. It builds on the long-term experience of the radio pathfinders RICE, ANITA, ARA and ARIANNA. RNO-G combines the sensitive surface log-periodic dipole antennas as used for ARIANNA with deep antennas and a low-noise phased array trigger as featured in ARA. The design of RNO-G also serves as a possible reference design for the proposed radio neutrino array of IceCube-Gen2.

The next three figures demonstrate the operation principle and the design of RNO-G. 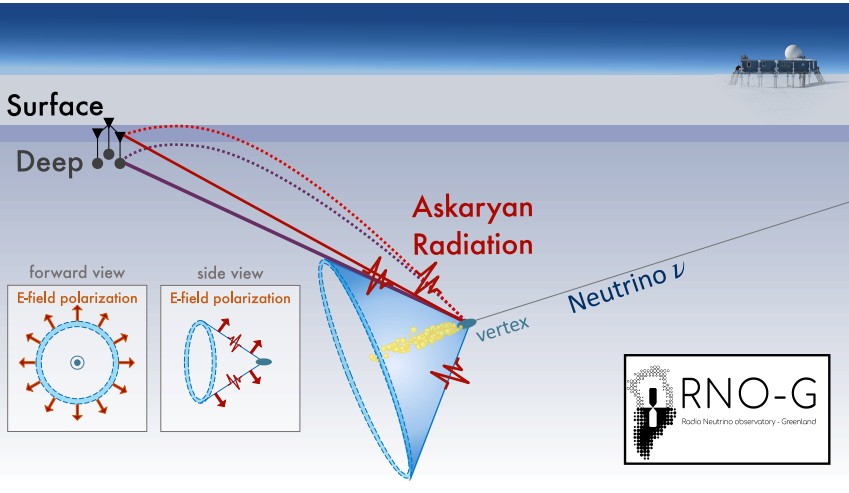 Schematic of the detection of the radio emission following a neutrino interaction. The emission is strongest at the Cherenkov angle (blue cone) and can follow straight and bent trajectories to the receiving station depending on the profile of the index of refraction of the ice. The signal is usually detected at large distances and is strongly polarized as illustrated in the insets. 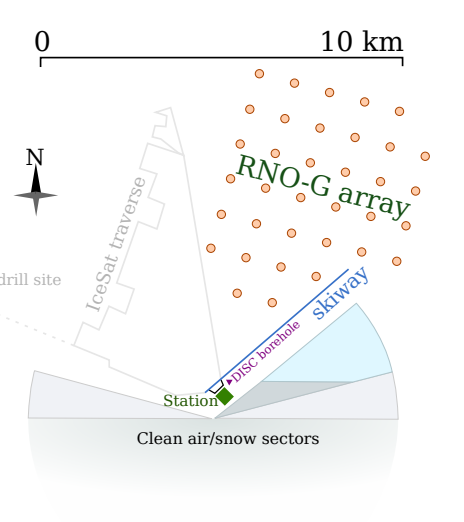 Map of the planned RNO-G array. The grid spacing is approximately 1 km. 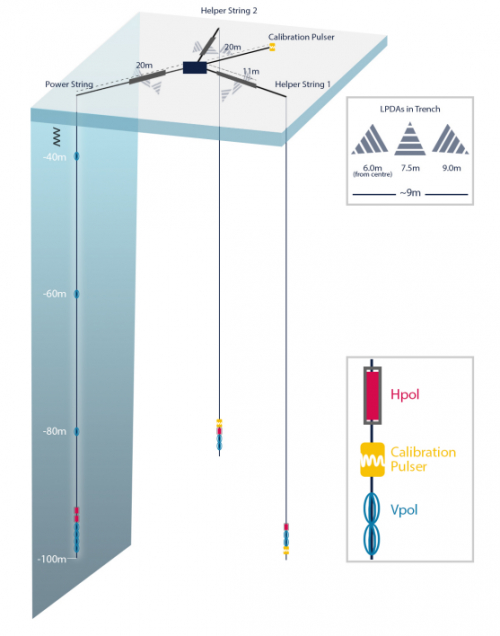 Single RNO-G station. It consists of three strings of antennas (Hpol and Vpol) plus surface antennas (LPDAs), as well as three calibration pulsers located both deep in the ice and also at the surface. The string containing the phased array trigger is designated as the power string, while the two additional strings are designated as support strings.

Prior investigations by collaboration members showed that the ice at Summit Station shows suitable properties for a sensitive radio array. RNO-G is the first ultra-high energy neutrino detector with a view of the Northern sky and the first in Europe. This makes RNO-G complementary to any current or future radio detector at the South Pole, which is particularly interesting for the potential follow-up of transient sources. Furthermore, the RNO-G field of view coincides with that of the optical IceCube detector at sub-PeV energies, enabling the study of Northern sources over an extended range of neutrino energies.

Also in view of the global pandemic, the location in Greenland has proven advantageous. While travel and logistics through New Zealand has been limited and heavily restricted, the government of Greenland never completely closed the country for travel during

the summer season. Albeit following a strict quarantining policy, a team of in total 14 people (in varying shifts) could travel to Summit this year, Europeans traveling directly to Kangerlussuaq via commercial airlines. The last team member returned home at the end of August.

A major milestone of the work during this first deployment season was the drilling of the first holes to 100 meters depth using the novel mechanic BigRAID drill as constructed by colleagues from the British Antarctic Survey (BAS) specifically for this project. The drill delivers dry holes with a diameter of 28 cm down to 100 meters nominally in one day and can easily be operated by two people. In this first field test, one hole was obtained at the nominal speed. However, further improvements are needed to sustain this speed during the entire operation. Still, with 10 holes, this drill competed more holes than any other drill in its first field season.

The three installed stations all operate as planned. First signals from the usual suspects, snow machines and walkie-talkies, have been identified. The search for cosmic ray signals as first physics verification is ongoing. Several ice measurements were also conducted by the field team, which will yield important information about attenuation length and other ice properties. Minor improvements to the design are foreseen in 2022. Even though the global chip shortage also affects this experiment, hardware for additional 7 stations has already been constructed, so that the field season can move forward.

Next to the first radio stations, the crew installed server infrastructure and a custom LTE network for data transfer at Summit Station. With a summer population of fewer than 35 people, the infrastructure at Summit Station is much smaller than what one may extrapolate from the experience at South Pole Station. This constraint requires the radio stations to be fully autonomous, exclusively powered with renewable energies. While in this season only solar panels have been installed, meaning that the detector is currently in a low-power state for the winter, the collaboration expects to be able to add wind turbines in one of the following seasons in order to retain full operation all year round.

Three more deployment seasons are planned and ultimately, RNO-G is expected to consist of 35 stations, reaching the highest yearly sensitivity of any neutrino detector at 1 EeV.

RNO-G is funded mainly through Belgian (FWO) and German agencies (Helmholtz W2/W3 initiative, DFG), and contributions from US partners, including project and logistics support by the National Science Foundation.

Thanks to Anna Nelles (DESY/ECAP) for providing this text!

On Thursday, October 13, Igor Sokalski, a former member of the Baikal and ANTARES collaborations, passed away from a heart attack, aged 59. We lose a good friend and an honest and enthusiastic physicist. 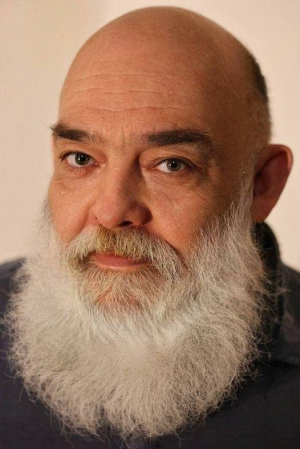 Everybody of the elder members of the Baikal collaboration remembers his selfless, thorough role in preparing and implementing the yearly expeditions of the 1980s and 1990s. This was a time when things in Russia became worse and worse and the realization of the expeditions became not only just difficult but sometimes even dangerous, and only a person of Igor’s responsibility and accurateness would have managed to meet these challenges.

In the late 1990s Igor, together with Edgar Bugaev and Sergey Klimushin, started to develop MUM, a flexible Monte Carlo algorithm for muon propagation through matter. Edgar Bugaev remembers: “I have always been impressed by Igor's incredible capacity for work, his ability to determinedly carry out any scientific work and to push it to publication.”  Igor continued to work on muon propagation when he left his mother institution INR Moscow and spent a year in the ANTARES group in Paris and another three years in Teresa Montaruli’s ANTARES group in Bari. There he also worked on subjects like the detection of astrophysical tau neutrinos or the effect of neutral current interactions on neutrino propagation through the Earth.

Back from Italy, Igor spent twelve years working for radio and information technology, before he joined the Kurchatov Institute in Moscow and more recently the Joint Institute for Nuclear Research in Dubna. While his focus at the Kurchatov Institute was the P2O project (sending a neutrino beam from Protvino to ORCA), in JINR he turned back to muon propagation and was contributing to a new simulation package for GVD which is conceived to flank the existing one.

Igor was also an impassioned photo artist, see some of his works at Igor Sokalski Art (fineartamerica.com).

May he rest in peace! We, his friends in Russia, Germany, France and Italy, will not forget him.