ANTARES is smoothly taking data and continues to play a successful role in various multi-messenger and alert programs.  However, given the configurations of ORCA and ARCA now operating, the termination of ANTARES operation will happen at the next favorable occasion. The latter is not yet firmly scheduled.

A summer task force is preparing the next deployment season, including an additional building and other upgrade operations at the shore. Also, the implementation of new trigger options is studied, with the aim to improve the cluster sensitivity close to the horizon.  All eight clusters are taking data. Most optical modules for the two clusters to be deployed in the next season are ready (partially due to the deployment of only one cluster last season, due to extended repair operations).

The ARCA and ORCA detectors are taking data smoothly. The next sea operations are scheduled in September, with the hope to add five Detections Units (strings) to ARCA and seven to ORCA

South Pole operations for the 2021/2022 season are still heavily impacted by COVID. There is a high probability that this year's Upgrade season is zeroed out. That would move the planned upgrade with seven strings from 2022/2023 to 2023/2024. The two new Winterovers Wen Marie-Sainte and Moreno Baricevic (both with previous Polar experience at Concordia Station) will replace Josh and Martin, the present winterovers, while one or two additional persons will go down for several weeks to replace components in the IceCube Laboratory.  Cargo which IceCube has already in the pipeline, will hopefully move south, some of it at least.

Aurorae and the Milky Way do not care about COVID, at least this is what we can conclude from the following pictures which Josh and Martin have sent us: 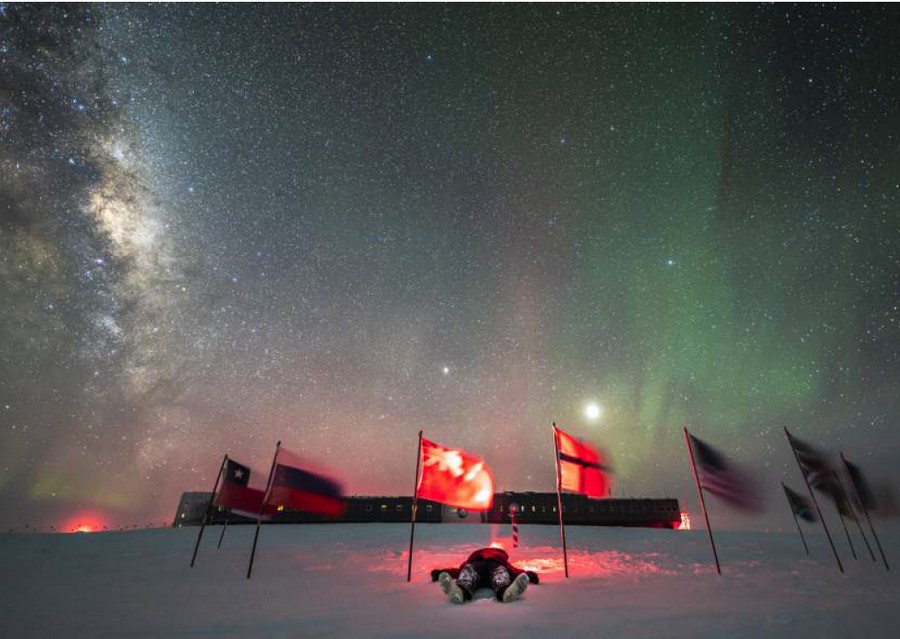 In the foreground is the ceremonial Pole with the flags and an exhausted winterover taking a dramatic rest between the flags. In the background is the South Pole station. Top left is the Milky way, top right an aurora. The bright object above the Norwegian flag is Jupiter while Saturn is just to the upper left of the New Zealand flag. 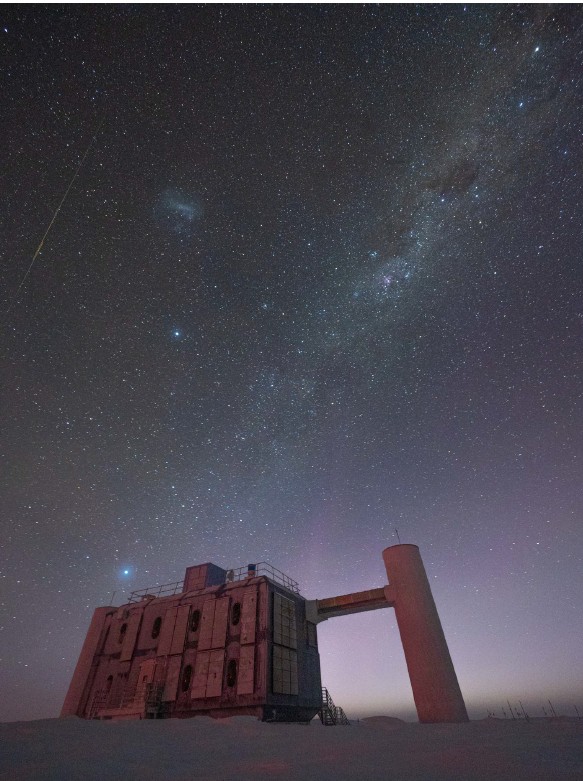 The Sun rises behind the IceCube Laboratory, you can also see the Milky Way and the Large Magellanic Cloud off to the side.

Martin and Josh do not only shoot great aurora pictures but are also working hard! See below Josh unscrewing DOM cables in order to replace a GPS card. 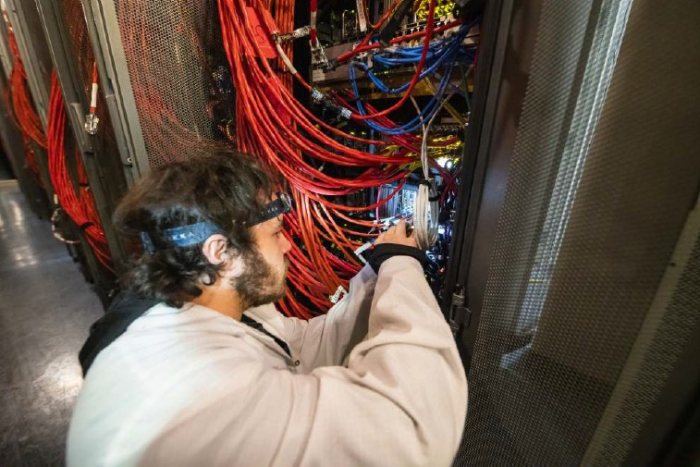 The KM3NeT collaboration has submitted a paper «Sensitivity to light sterile neutrino mixing parameters with KM3NeT/ORCA» to the Journal of High Energy Physics, JHEP (posted at  2107.00344.pdf (arxiv.org)). The paper reports the sensitivity of ORCA to the presence of a light sterile neutrino in a 3+1 model. The following figures demonstrate that after three years of data taking, ORCA will be able to probe the active-sterile mixing angles θ14, θ24, θ34 and the effective angle θμe, over a broad range of mass squared difference Δm41² from 10-5 to 10 eV², allowing to test the eV-mass sterile neutrino hypothesis as the origin of short baseline anomalies, as well as probing the hypothesis of a very light sterile neutrino, not yet constrained by cosmology.

The JUNO and KM3NeT collaborations have submitted a joint paper «Combined sensitivity of JUNO and KM3NeT/ORCA to the neutrino mass ordering» to JHEP (posted at 2108.06293.pdf (arxiv.org)).

A combined analysis turns out to be more powerful than simply adding the sensitivities for both experiments. This is due to a tension arising in the  Δm31² measurement between JUNO and ORCA when the wrong neutrino mass ordering is assumed.

The combination significantly reduces the time required to reach a 5σ determination of the neutrino mass ordering for any value of the oscillation parameters. In all cases, a 5σ measurement can be obtained within 6 years for the combined analysis, compared to more than 10 years using only ORCA data, depending on the true ordering.

The ANTARES collaboration has submitted a paper «Studying Bioluminescence Flashes with the ANTARES Deep Sea Neutrino Telescope» to Ocean Dynamics (posted at [2107.08063] (arxiv.org)). The main authors come from the Information Field Theory Group, Max Planck Institute for Astrophysics, and Chair of Robotics, Artificial Intelligence and Real Time Systems, Technical University of Munich, both in Garching, and from Department of Astrophysics/IMAPP, Radboud University, Nijmegen.

The paper presents a novel technique to exploit the extensive data sets provided by underwater neutrino telescopes to gain information on bioluminescence in the deep sea. The paper proposes a statistical method that allows reconstructing the light emission of individual organisms, as well as their location and movement. A mathematical model is built to describe the measurement process of underwater neutrino telescopes and the signal generation of the biological organisms. The so-called “Metric Gaussian Variational Inference algorithm” is used to reconstruct the model parameters using the recorded photon counts. The method is applied to synthetic data sets as well as to data collected by ANTARES.

The IceCube Collaboration has submitted a paper «Search for High-Energy Neutrinos from Ultra-Luminous Infrared Galaxies with IceCube» to Astrophysics Journal and posted it at [2107.03149] (arxiv.org).

The runs with synthetic data reveal that one can reliably model the emitted bioluminescent flashes of the organisms. Furthermore, it is found that the spatial resolution of the localization of light sources highly depends on the configuration of the telescope. Precise measurements of the efficiencies of the detectors and the attenuation length of the water are crucial to reconstruct the light emission. Finally, the application to ANTARES data reveals the first precise localizations of bioluminescent organisms using neutrino telescope data.

Ultra-luminous infrared galaxies (ULIRGs) have infrared luminosities LIR > 1012 LSun making them the most luminous objects in the infrared sky. They are generally powered by starbursts with star-formation rates that exceed 100 MSun yr-1, possibly combined with a contribution from an active galactic nucleus.  Such environments make ULIRGs plausible sources of astrophysical high-energy neutrinos.

The paper presents a stacking search for high-energy neutrinos from a representative sample of 75 ULIRGs with redshift z < 0.13 using 7.5 years of IceCube data (see next figure). 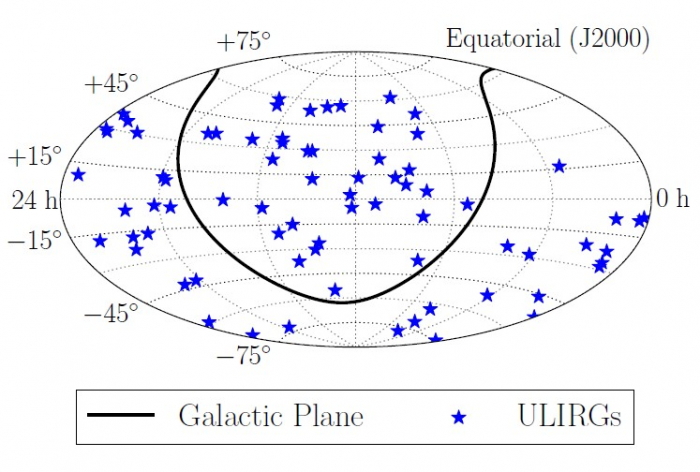 Also, the contribution of the ULIRG source population to the observed diffuse astrophysical neutrino flux as well as model predictions is constrained.

For overviews of our field, see the rapporteur talks of Anna Nelles (“Neutrinos and Muons” at

and of Irene Tamborra (“Multimessenger Astronomy”) at

You have to be a registered participant to get access. Anna’s talk is also freely available at

Giorgos Androulakis, QA/QC Manager of the KM3NeT Collaboration since 2017, passed away suddenly on the 9th of July 2021, aged 43. 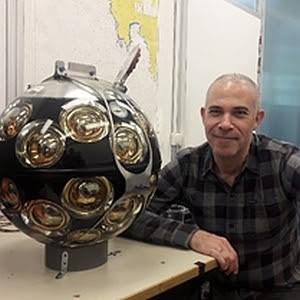 Read the obituary written by Paschal Coyle, posted also on the KM3NeT website:

Giorgos joined KM3NeT in 2014 as a member of the NCSR “Demokritos” in Athens, Greece and from the start he became deeply involved with the construction of the detectors. In 2017, he took over as the QA/QC Manager of the Collaboration, coordinating the activities for quality control during detector construction and operation and managing a team of local quality supervisors at the institutes involved in the detector construction. He was a key long-term member of the KM3NeT Management Team and the Steering Committee.

Giorgos was unfailing in his help to the institutes when setting up their facilities for the detector construction, to help understand the origin of problems when they arose, and to support people with the intricacies of the database. On the management side, his careful following of non-conformities and probing questions would often lead us to an understanding and a solution for the issue of the day. His logical approach, insight and sage advice were invaluable for many important decisions.

The recent successes of the collaboration in the construction of the seafloor infrastructures and detection units owe so much to his skills, dedication and hard work.

Giorgos was greatly appreciated by all the members of the collaboration; he was the oil that kept us all moving smoothly in the right direction. Many of us mourn a good friend. Personally, I will certainly miss our discussions over a few beers after a hard day at the Collaboration meeting and especially his unique and ironic sense of humor.

On behalf of the KM3NeT Collaboration, I would like to express our sincere condolences to his family and friends at this difficult time.

We will miss him dearly.