While the shore station at Lake Baikal is filling up more and more with physicists and technicians, the winterovers remaining at the Amundsen-Scott station waved farewell to the last airplane leaving for McMurdo at the Antarctic coast.

Below two pictures from this season’s first excursion to the location of the Baikal ice camp.

Dmitry Petukhov marks the location of the strings and Vitaly Shchur (foreground) measures the ice thickness (with a computer in one hand and the measuring device in the other).

Dmitry Petukhov with the string marker

The next photo was taken during the haul-up of a string deployed in one of the previous years. The aim is to repair failed components. In the foreground the buoys which keep the strings vertical. They are arranged at a depth of about 25 m and consequently are the first components to be moved back from the water to the ice. 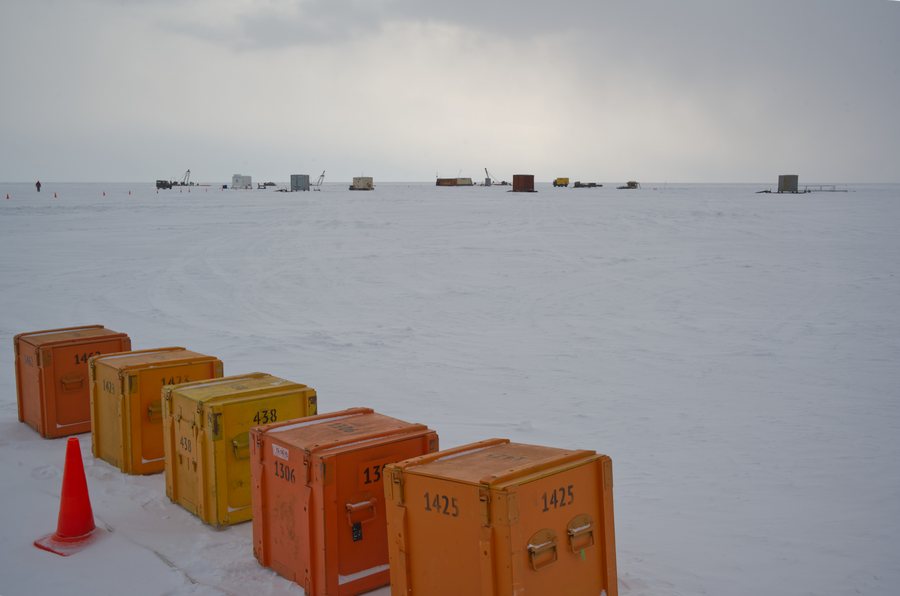 Boxes with optical modules waiting for deployment. In the background the ice camp with winches, cranes, containers.

At the South Pole it’s still light outside, but winter is fast approaching.  The week before February 22 saw both arrivals and departures, and as can be seen in the following two pictures, the departures (first picture) well outnumbered the arrivals (second picture).  All the winterovers who will remain on station for this winter have arrived. With that, the winterover crew is complete, with 39 people. Last week, the station was closed and the last plane left for McMurdo. 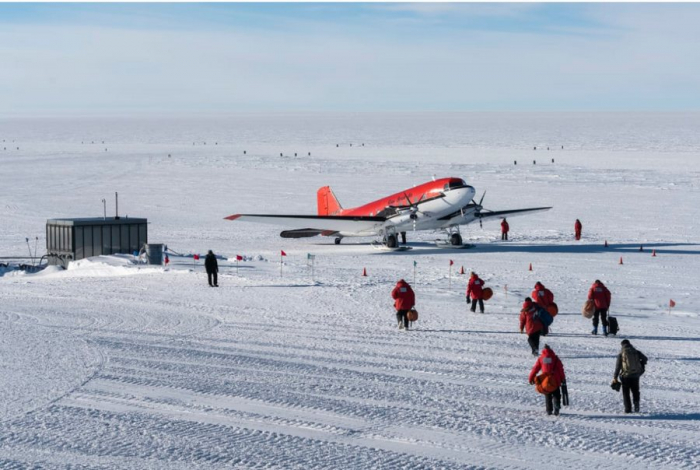 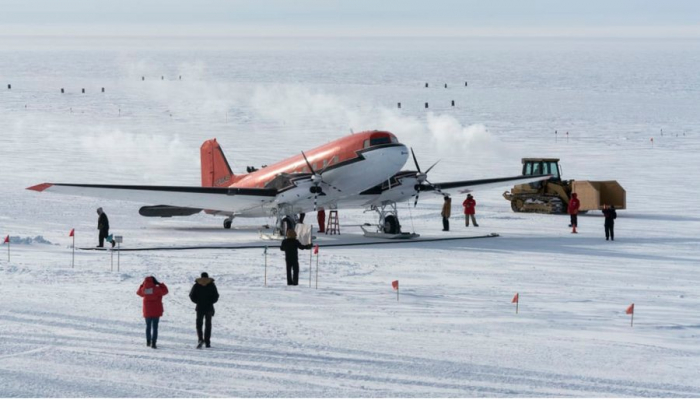 Call for Nominations for the 2021 GNN Dissertation Prize

The GNN Board announces the call for the 2021 GNN Dissertation Prize. This is the seventh year the prize will be awarded. The conditions are:

1) All involved in supervising PhD theses can send nominations.

2) Only one candidate can be nominated per proposer.

3) The thesis must have been successfully defended.

5) The proposer should submit a short laudation detailing why she/he proposes the thesis for the Dissertation Prize.

6) Accepted languages are, to a certain degree, defined by the availability of reviewers from other countries and institutes. We expect to accept English, French, Italian and Russian as thesis languages (assuming that German, Danish, Swedish and Dutch theses are in English and those from Morocco and Belgium in English or French).

7) If not contained in the thesis, a 2-page English summary written by the candidate is required.

8) The main criterion will be the quality of the thesis, not just the best limit or most spectacular result. It is thus also possible to receive the prize for a technical thesis or e.g. for a thesis on improving the event reconstruction.

Paschal Coyle took over from Mauro Taiuti as spokesperson. Mauro’s term has finished after four years.

This is the new KM3NeT management team:

Uli Katz (Erlangen) serves as chair of the KM3NeT Institute Board.

The XIX International Workshop on Neutrino Telescopes (February 18-26), excellently prepared and run by Elisa Bernardini and Mauro Mezzetto, is over. It was ennobled by introductory talks of three Nobel Laureates, Sheldon Glashow, Carlo Rubbia and Barry Barish, followed by a talk of Francis Halzen who presented the well-known 6.3 PeV event in IceCube, the “Glashow event”. Glashow in his talk: “IceCube detected one likely instance of the so-called Glashow resonance, which I imagined over 60 years ago. Let them see another!”

The KM3NeT Collaboration has submitted a paper The KM3NeT potential for the next core-collapse supernova observation with neutrinos to EPJ C (see 2102.05977.pdf (arxiv.org) ).

The paper studies the capabilities of two ARCA blocks and one ORCA block, with a total of ∼ 6200 digital optical modules (DOMs). The total number of photomultipliers is ∼ 200,000 (31 PMTs with 8 cm diameter per DOM). With this configuration, KM3NeT will achieve sensitivity to ∼ 10 MeV neutrinos from Galactic and near-Galactic core-collapse supernovae.

The interaction of a neutrino below 100 MeV produces a charged lepton (e + or e −) travelling up to a few tens of centimetres. Since this distance is small compared to the typical separation between the optical modules of an underwater/ice experiment, the corresponding Cherenkov signatures cannot be reconstructed as individual events. Instead, one searches for a coherent increase in the counting rates of the individual optical modules. This principle has first been applied to AMANDA and then to IceCube. The next figure shows the sensitivity of IceCube to a Core-Collapse Supernova (CCSN) of a star with 20 solar masses as a function of the distance (see  1108.0171.pdf (arxiv.org)). 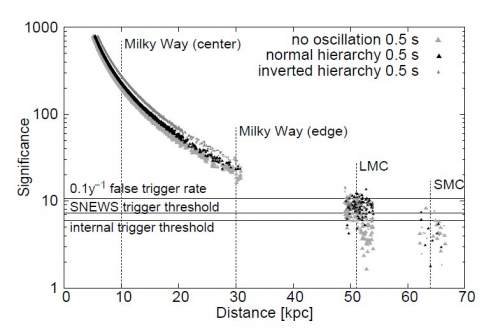 IceCube’s advantage is the low counting rate of the photomultipliers – only some hundred Hz for a 10-inch PMT. This is due to the absence of 40K decays and bioluminescence in ice.

KM3NeT, in contrast, faces a high counting rate. Even for a small 8-cm PMT the background counting rate is 7 kHz in average. This makes the identification of a counting rate excess much more challenging than for IceCube, and actually it was open whether underwater neutrino telescopes could add substantial information to the IceCube results.

The present paper demonstrates that KM3NeT can do an astonishingly good job in identifying a burst of MeV neutrinos from a Supernova. The method is to look for a sufficient number of DOMs with the multiplicity of fired small PMTs being above a certain threshold number (defined by the background counting rate from 40K decays) and, in addition, to apply cuts against light from high-energy muons which can easily fire more than 5 small PMTs in a DOM.  The next figure shows the expected number of events (which means in this case: number of DOMs) in a KM3NeT building block as a function of the threshold multiplicity for the small PMTs in a DOM. Note that due to the difference in the muon filter performance, the background rate at higher multiplicity is lower in ORCA than in ARCA.

Applying appropriate cuts to the number of DOMs with the multiplicity of small PMTs larger than a threshold value, the sensitivity depicted in the next figure can be reached.

The observational horizon for a 5σ discovery covers essentially the Milky Way and for a very heavy progenitor even extends to the Small Magellanic Cloud at ∼ 60 kpc. The time profile of the neutrino signal allows determining the arrival time of the neutrino burst with a precision of a few milliseconds for sources up to 5–8 kpc away, and detecting the peculiar signature of the standing accretion shock instability if the core-collapse supernova explosion happens closer than 3–5 kpc, depending on the progenitor mass.

Following the talk of Aart Heijboer at the Venice Workshop on Neutrino Telescopes, even the presently operating 6 ORCA lines would trigger on a 27MSun CCSN at the 5σ discovery level up to distances of 10 kpc: welcome to the Supernova Community!

In the context of this paper, it is also useful to have a look at the paper Combining neutrino experimental light-curves for pointing to the next Galactic Core-Collapse Supernova by  Alexis Coleiro, Marta Colomer Molla, Damien Dornic, Massimiliano Lincetto, Vladimir Kulikovskiy, EPJC 80, 856 (2020) and 2003.04864.pdf (arxiv.org).

A neutrino from a Tidal Disruption Event?

Two papers on a possible correlation between an IceCube neutrino and a Tidal Disruption Event (TDE) have been published in Nature Astronomy on February 22.

The first paper A tidal disruption event coincident with a high-energy neutrino has members of the ZTF (Zwicky Transient Facility (Zwicky Transient Facility - Wikipedia) as authors. The second paper A concordance scenario for the observed neutrino from a tidal disruption event refers to the first one and is authored by Walter Winter (DESY) and Cecilia Lunardini (Arizona University).

A TDE occurs when a star on a Keplerian orbit gets close enough to a supermassive black hole (SMBH) to be disrupted by the SMBH’s tidal forces. Then the stellar debris falls back to the SMBH at a super-Eddington rate, showing a characteristic flare that lasts for months to years.

On October 1, 2019, IceCube reported the detection of a ~0.2 PeV neutrino (named IC191001A), with an estimated 59% probability of being of astrophysical origin, judging from reconstructed energy. Seven hours later, the Zwicky Transient Facility (ZTF) inspected the direction of that neutrino, as part of its neutrino follow-up program. They identified the radio-emitting TDE named AT2019dsg as a candidate neutrino source.

The probability of finding any coincident radio-emitting TDE by chance is 0.5%, while the probability of finding one as bright in the bolometric energy flux as AT2019dsg is 0.2%. The electromagnetic observations can be explained through a multizone model (see the figure), with radio analysis revealing a central engine, embedded in a UV photosphere, that powers an extended synchrotron-emitting outflow.

This provides an ideal site for PeV neutrino production. Assuming that the association is genuine, the ZTF observations suggest that TDEs with mildly relativistic outflows contribute to the cosmic neutrino flux.

The IceCube collaboration has already searched for correlations between a sample of TDEs and a neutrino dataset dominated by lower-energy events, and reported that thermal TDEs account for less than 39% of the diffuse astrophysical flux under the assumption of standard candles following a power-law spectrum (see ICRC2019, 1016 (PoS, 2019)). The detection of a single TDE–neutrino association within the ZTF programme would imply that at least 3% of the astrophysical neutrino alerts arise from the TDE population, fully compatible with IceCube’s pre-existing limits.

The radio data of AT2019dsg provided the first direct proof of a central engine in such a TDE, and furthermore proved that this central engine was still active at the time of the neutrino detection 150 days after the optical peak and pumped additional energy into the system (to be distinguished from the duration of the flare which can extend over months and years). This is a longer period than previously searched by IceCube, but adds to other multi-wavelength evidence indicating that TDE non-thermal emission can be long-lived. Therefore, future neutrino searches should probably target these longer timescales.

Walter Winter and Cecilia Lunardini in their paper introduce a phenomenological concordance scenario with a relativistic jet to explain the association between the TDE and the IceCube neutrino: an expanding cocoon progressively obscuring the X-rays emitted by the accretion disk, while at the same time providing a sufficiently intense external target of backscattered X-rays for the production of neutrinos via proton–photon interactions. They are able to reproduce the observed delay (relative to the electromagnetic peak) of the neutrino emission.

See also the paper Neutrinos from tidal disruption events of Kimitake Hayasaki, which appeared in the same volume of Nature Astronomy under Views & News and is available at 2102.11879.pdf (arxiv.org).