The biannual VLVνT Conference (originally planned as a face-to-face conference in Valencia for autumn 2020) will now be held from 18 to 21 May 2021 as an online meeting.  More information under https://indico.ific.uv.es/event/3965. 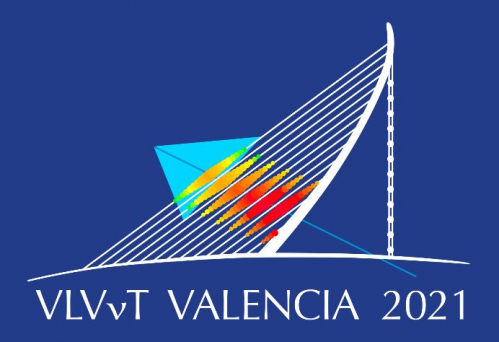 As usual, the workshop will be a forum where the latest developments in neutrino astronomy are discussed together with the recent progress on the technological and instrumentation aspects of current and future large-scale neutrino detectors in water and ice. The program will include invited talks as well as contributed talks and posters. Abstract submission is now open until February 28th.

Note that VLVνNT will be held in conjunction with the GNN internal MANTS meeting.

The 2020 GNN Dissertation Prize is awarded to René Reimann (University of Mainz, Germany) for his thesis titled "Search for the Sources of the Astrophysical High-Energy Muon-Neutrino Flux with the IceCube Neutrino Observatory". René has graduated from RWTH Aachen under the supervision of Christopher Wiebusch who has also nominated him.

René's thesis has been selected by the Prize Committee (chaired by Uli Katz) out of six nominations. The high quality of the candidate theses made the choice difficult and required several rounds of assessments by the Committee members. 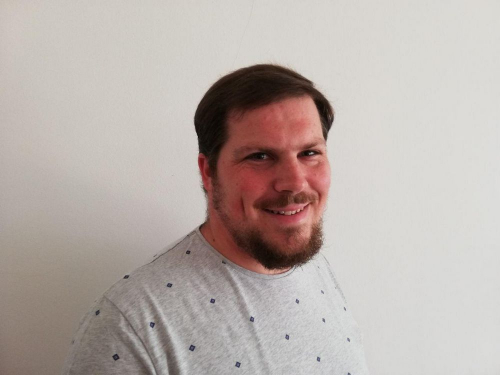 News from ANTARES and KM3NeT

If you want to learn how DOMs of KM3NeT are assembled, have a look at this nice video on the KM3NeT webpage: https://www.km3net.org/new-video-a-visit-to-the-pimu-hall/.  It shows how the DOMs are integrated at Nikhef.

The ANTARES collaboration has granted the Observer Status to the Lebedev Physical Institute, the Moscow Institute of Physics and Technology, and Moscow Institute for Nuclear Research.  Those institutes are hosting the authors of the recent papers on the connection between IceCube data and radio sources: A. Plavin, Y. Kovalev, Yu. Kovalev and S. Troitsky (arXiv:2001.00930 and arXiv:2009.08914, see also the Sept./Oct. 2020 edition of GNN Monthly). The Observer Status provides access to the ANTARES data.

The winter expedition comes closer, and in less than three weeks the first group will arrive at Lake Baikal. Due to several reasons, the number of new clusters to be deployed has been reduced from two to one. First of all, COVID-19 has led to some delays, moreover it will require special measures before and during the expedition, which may slow down the operations.

Secondly, it is planned to clean up several problems which have accumulated over the last years and to find appropriate solutions to avoid them in the future. This includes the vulnerability of the detector to lightnings. Last year, for instance, the communication to two clusters broke during usual summer thunderstorms and lightnings. This problem is going to be cured with a better early warning system which will flank the array by improved protection measures and allow its shutdown before lightnings arrive. 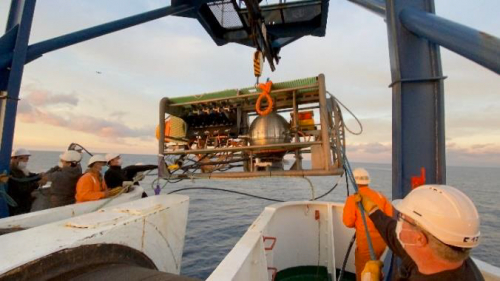 A fantastic spectacle, but not for the best of GVD: a summer lightning over Lake Baikal.

The 2021 Bruno Rossi Prize has been awarded to Francis Halzen and the IceCube Collaboration "for the discovery of a high-energy neutrino flux of astrophysical origin".

The Bruno Rossi Prize is awarded annually "for a significant contribution to High-Energy Astrophysics, with particular emphasis on recent, original work."

Impressions from the South Pole

The following picture shows the two IceCube winterovers removing the IceACT prototype from the roof of ICL in order to clean and repair it. 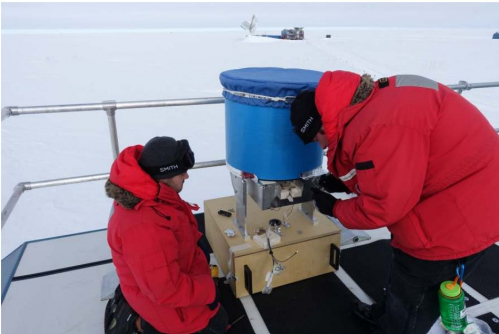 The IceACT (Ice Air Cherenkov Telescope) is a compact imaging air Cherenkov telescope. It is under consideration as part of IceCube-Gen2.

The next picture shows the winterovers after digging out old ARIANNA field equipment, with everyone standing in their dug-out holes. ARIANNA was a proof-of-concept experiment at the South Pole to detect very high-energy neutrinos via radio waves. 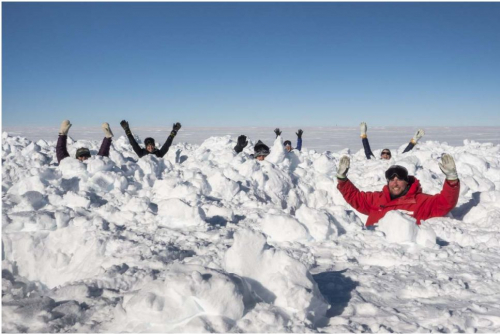 The IceCube Collaboration has submitted a paper Search for GeV Neutrino Emission During Intense Gamma-Ray Solar Flares with the IceCube Neutrino Observatory to Phys. Rev. D (posted at  2101.00610.pdf (arxiv.org)). While standard IceCube analyses address energies > 100 GeV (IceCube), > 10 GeV (DeepCore) and ~ 10 MeV (Supernova trigger), this analysis looks for neutrinos of a few GeV (< 5 GeV). Such neutrinos are expected from solar flares. These flares convert magnetic energy into plasma heating and kinetic energy of charged particles such as protons. Protons leave the coronal acceleration region and interact with the dense plasma in the lower solar atmosphere, generating pions and via their decay neutrinos (see the next figure). 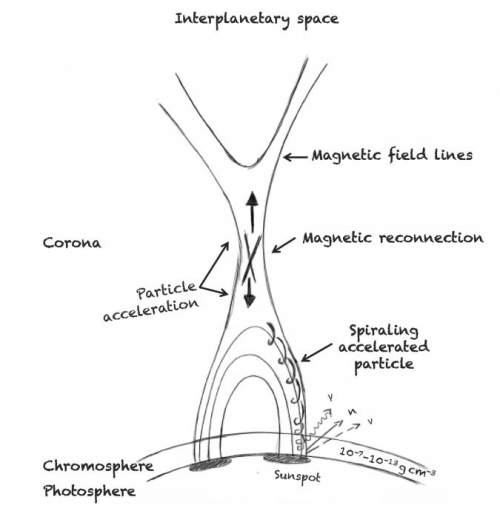 Schematic representation of a solar flare. The cross represents the magnetic reconnection and the two arrows show the direction of the subsequent outflow jets.

Events of a few GeV would fire only a few optical modules (see next figure). Therefore, they could not be identified from a steady source, but only from transient sources via an on/off analysis. Here, the on-state is defined by a Fermi-LAT signal (from the direction of the Sun) in the GeV region which indicates that it originates from π0 decay. 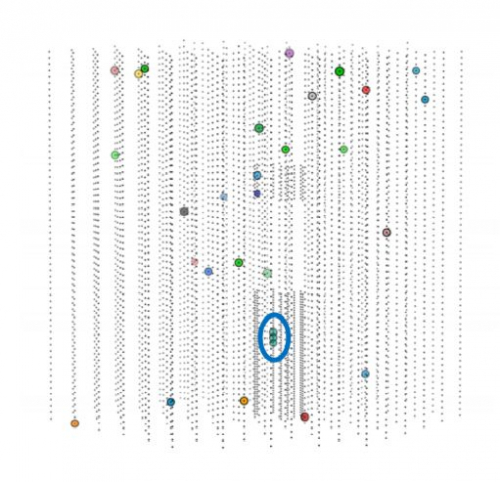 A GeV neutrino interaction in Deep Core with only three neighboured DOMs being hit.

Main steps of the analysis are the rejection of events with E > 5 GeV and of pure noise, a series of cuts to increase the purity of the sample, and the optimization of the time window. In the analysis of five strong flares between 2012 and 2017, no significant excess has been observed and upper limits have been derived. The neutrino upper limits are presented as a function of the parameter space (δν, C), where δν is the spectral index (expected between 4 and 6) and C the integrated neutrino flux between 500 MeV and 5 GeV. The next figure shows the upper limit obtained for the flare from September 10th, 2017, together with its systematic uncertainties. The obtained upper limit is compared to two predictions.

The IceCube Collaboration has posted a paper IceCube Data for Neutrino Point-Source Searches: Years 2008–2018 at [2101.09836] (arxiv.org). IceCube has performed several all-sky searches for point-like neutrino sources using track-like events, including a recent time-integrated analysis using 10 years of IceCube data. This paper accompanies the public data release of these neutrino candidates detected by IceCube between April 6, 2008 and July 8, 2018. The selection includes through-going tracks, primarily due to muon neutrino candidates, that reach the detector from all directions, as well as neutrino track events that start within the instrumented volume. An updated selection and reconstruction for data taken after April 2012 slightly improves the sensitivity of the sample. While more than 80% of the sample overlaps between the old and new versions, differing events can lead to changes relative to the previous 7-year event selection. An aposteriori estimate of the significance of the 2014-2015 TXS flare is reported with an explanation of observed discrepancies with previous results. This public data release, which includes 10 years of data and binned detector response functions for muon neutrino signal events, shows improved sensitivity in generic time-integrated point-source analyses and should be preferred over previous releases.

The data can be found at https://icecube.wisc.edu/science/data/PS-IC40-IC86_VII