A series of educational videos “BAIKAL-GVD. Neutrino Hunters” covers the construction of the unique facility for detecting neutrinos in Lake Baikal, objectives of the experiment and people involved. This series illustrates all the serious and funny, the magnificent and ordinary, the simple and complicated—everything that the people face striving to reveal the next mystery of the Universe. 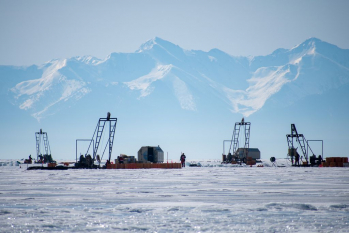 The discovery of astrophysical high-energy neutrinos in 2013 marked the birth of a new field of knowledge, high-energy neutrino astrophysics. It happened after the IceCube detector based on the South Pole and embedded into the Antarctic ice detected a neutrino with the energy above 1000 TeV for the first time. To date, the IceCube experiment detected more than 100 astrophysical high-energy neutrinos in the Southern Hemisphere. To detect neutrinos coming from the entire celestial sphere, a gigaton-scale neutrino telescope is needed in the Northern Hemisphere. For this reason, the second-generation neutrino telescope BAIKAL-GVD at Lake Baikal has been under construction since 2015.

The growing Baikal Neutrino Telescope is a unique scientific facility and constitutes, along with the IceCube, ANTARES and KM3NeT telescopes, the Global Neutrino Network (GNN) being a significant element of this network in the Northern Hemisphere.

Neutrinos are great at telling us about astrophysical catastrophes. They rush through the Universe without being absorbed by anything. Since the particles are neutral, magnetic and electric fields do not deflect them. That is, their source can be found in the direction from where the neutrinos were detected. The sources of the neutrinos having reached the Earth are supernova explosions, black holes, active galactic nuclei or binary star systems. All this makes neutrinos a wonderful tool for studying cosmic processes.

The BAIKAL-GVD Neutrino Telescope is intended for detection and research of high-energy neutrino fluxes from astrophysical sources. Using its capacities, scientists plan to study the processes with enormous energy release which happened in the Universe long ago. One of the riddles in modern astrophysics is the mechanism generating astrophysical neutrinos in the Universe which are billion times more energetic than solar ones. Due to its singular characteristics, the Baikal Neutrino Telescope will shed light on this mystery. 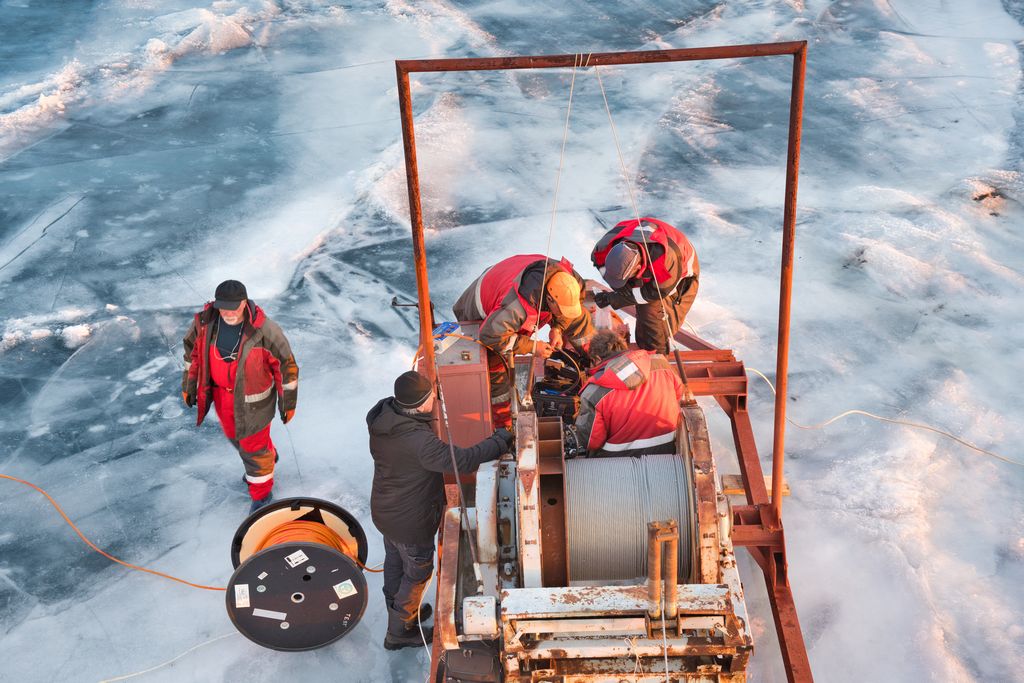 The Baikal Neutrino Telescope is a neutrino detector located at Lake Baikal 3.6 km away from the shore at the depth of 1366 m. The facility location was carefully chosen. Firstly, there is a railway and power lines in this region. The city of Irkutsk, a large industrial and scientific centre, is just 55 km away from the detector. Secondly, the lake water is fresh, which prevents potential equipment damage. Thirdly, the lake is covered with stable thick ice making the telescope assembly secure. And finally, there is no background glow from K40 and flare bioluminescence, which could hinder an accurate detector operation.

On entering Lake Baikal, some elusive particles could be stopped by its water. After such an interaction, either a muon or a cascade shower of high-energy particles appears. Both a muon and a cascade shower cause water glowing called in physics Cherenkov radiation, a phenomenon discovered by the Soviet physicists P. A. Cherenkov and S. I. Vavilov. This light occurs when a charged particle (for instance, a muon) moves in water with the speed higher that the speed of light in water (speed of light diminishes inversely to the refraction index). Actually, this is the phenomenon when a muon is faster than light. The facility objective is to detect the Cherenkov radiation and separate astrophysical neutrino events from other possible ones. 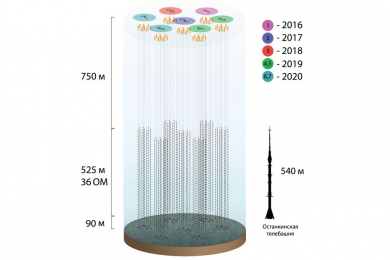 The largest structural unit of the GVD is a cluster. By 2020, the detector has comprised seven clusters located 300 m from each other. A cluster contains eight vertically suspended strings carrying 36 glass optical modules each. According to the project, the complete Baikal facility volume is to be about one cubic kilometre.

Now, the Baikal Neutrino Telescope is being constructed with concerted efforts of the international collaboration with a leading role of both the Institute for Nuclear Research of RAS (Moscow), an initiator of this experiment and neutrino astronomy as a scientific direction in the world, and the Joint Institute for Nuclear Research (Dubna). In total, more than 70 scientists and engineers from ten scientific centres in Russia, Germany, Poland, the Czech Republic and Slovakia are involved in this project. 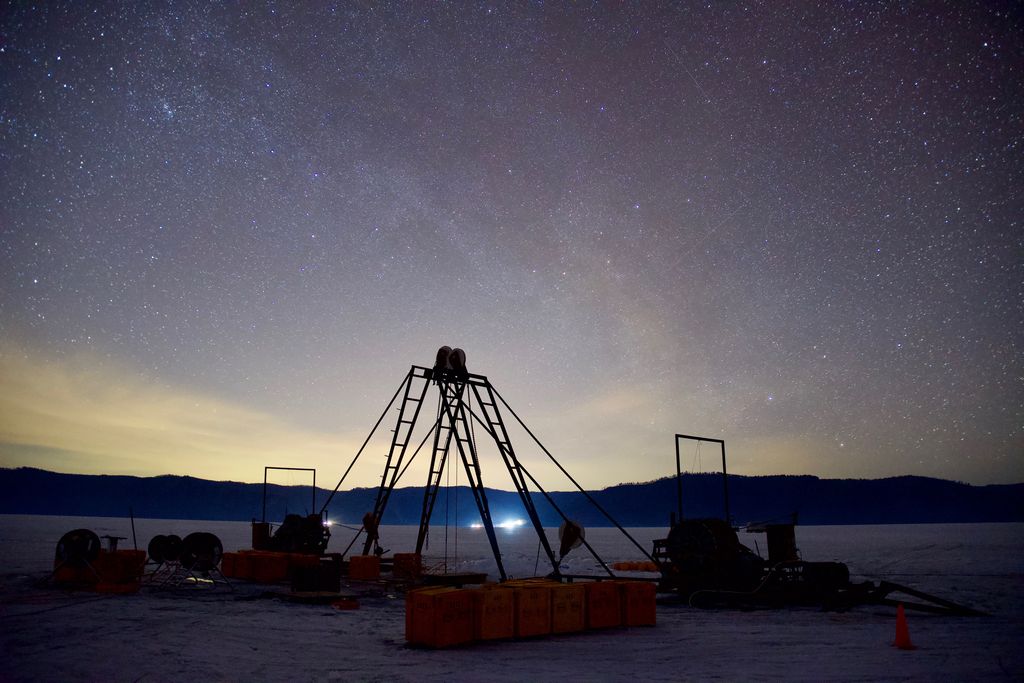 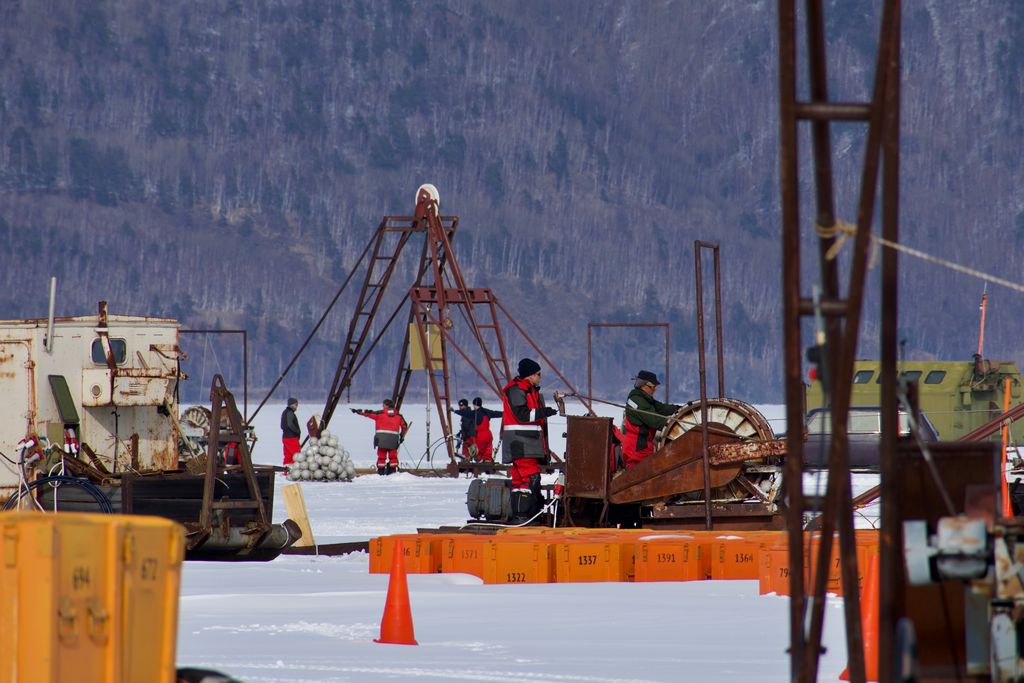 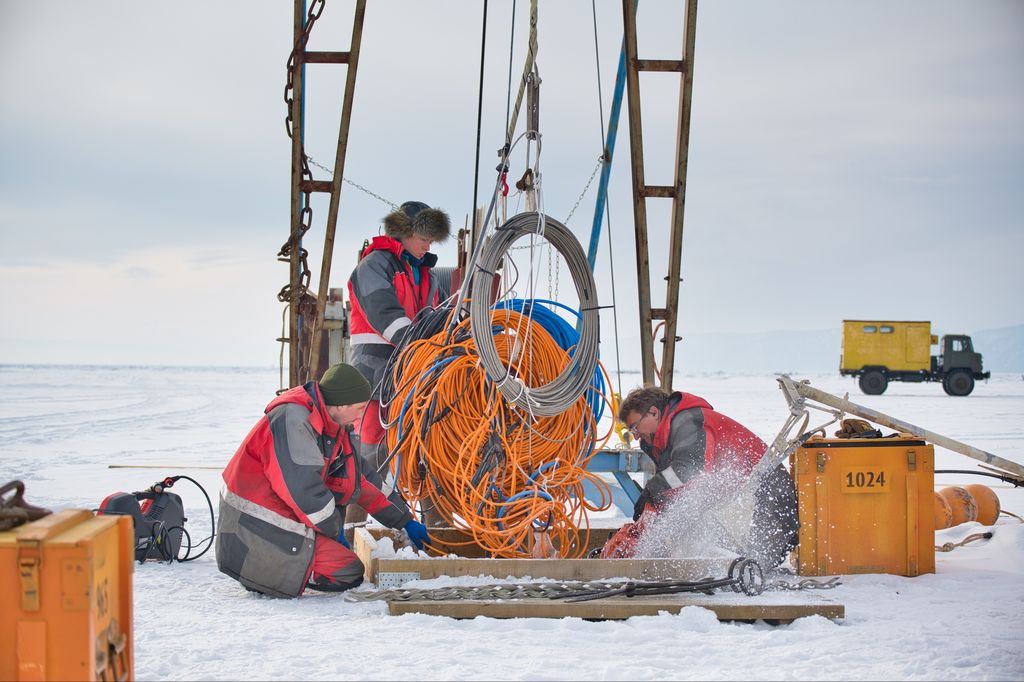 The series of educational videos “BAIKAL-GVD. Neutrino Hunters” is based on the Baikal Journal 2019 by Dmitry Naumov. Filming and editing by Mikhail Zhukov.